Love me Tinder is a heart-warming tale of friendship, music, love, laughter and dating, catch it at Rutherglen Town Hall in March! 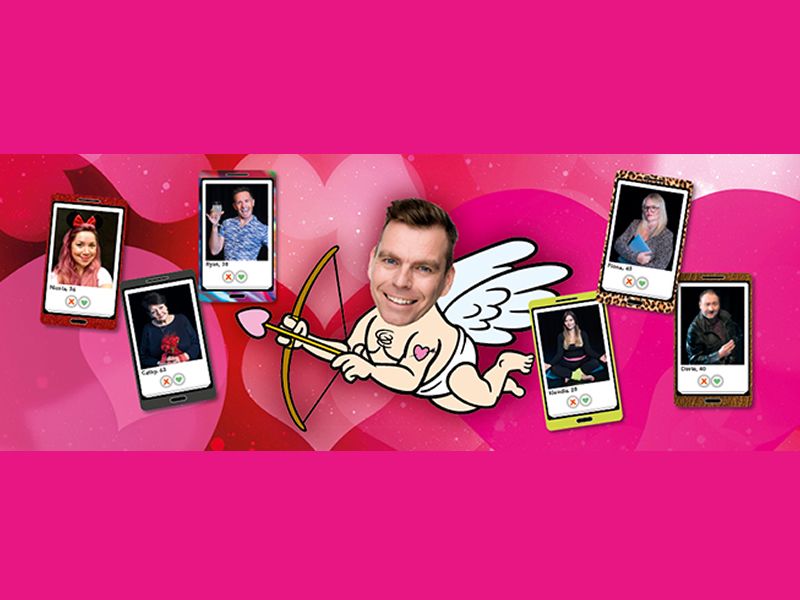 About Love Me Tinder - CANCELLED

Cathy - 63, was married for 40 years until her husband left her for his 28-year-old Polish Yoga teacher. Only ever been with Willie, time for a new one.
Nicola - Bolshy, wild, 36, has been quite a girl! Now deciding to swap boabies for babies. She might as well find a husband too.
Fiona - Career driven, sensible and permanently single, 45 and tirelessly searching for Mr Absolutely-Must-Be-Right!

Find out how our loveable girls get on, from creating their match-making profiles to speed dating and discovering the joys and perils of swiping right to avoid being left on the shelf.

Their mates Big Davie and Ryan offer the often side-splitting male perspective, while Cupid fae Cumbernauld is working his magic quietly in the background.

A heart-warming tale of friendship, music, love, laughter and dating.

Que Sera Sera is a magnificent tribute to the Hollywood Icon that is Doris Day, don't miss it at Rutherglen Town Hall on 30th August 2022!
Read more

Two's Company is the new comedy drama from the writer of The Ghosting of Rabbie Burns and co-writer of The Wedding Planners, Gillian Duffy... don't miss it at Rutherglen Town Hall!
Read more

A Tribute To The Great Crooners

Scotland's King Of Easy Listening, Colin Scougall, is touring with a brand new show full of classic songs made famous by the great crooners of the 20th century, don't miss him at Rutherglen Town Hall!
Read more

Leah MacRae, the wee powerhouse from Glasgow, is back with this brand-new show... prepare for belly laughs galore when she brings it to Rutherglen Town Hall on Friday 30th September!
Read more

Rolling Back The Years

Step back into the magical atmosphere of theatre and re-live the fantastic sounds of the 50's, 60's and 70's when Rolling Back The Years comes to Rutherglen Town Hall on 18th October!
Read more

I Spy With My Little Eye

There'll be a treasure hunt, all your favourite sing along songs and lots of party games when 'I Spy With My Little Eye' comes to Rutherglen Town Hall on October 20th!
Read more

Don't miss a night of Americana, folk, blues and classic rock and roll when After The Last Waltz comes to Rutherglen Town Hall on Friday 4th November!
Read more

The Freddie and Queen Experience

The Freddie and Queen Experience are one of the UK's Premier Queen and Freddie Mercury Tribute Bands who are internationally and critically acclaimed, don't miss them at Rutherglen Town Hall!
Read more

Join the cast of enchanted characters on a roller coaster ride of thrills and spills when family panto, Beauty And The Beast, comes to Rutherglen Town Hall this Christmas!
Read more

Nearly Elton is a stunning celebration of the music and life of one of the greatest showmen of our time! Catch it at Rutherglen Town Hall on Friday 24th February!
Read more

The Wedding Planners is the hilarious girls' night out you won't want to miss and it's coming to Rutherglen Town Hall on 19th April!
Read more

When We Were Young

When We Were Young at Rutherglen Town Hall is both a hilarious and nostalgic look back to 1990s Glasgow as well as a heartbreaking story of stolen youth.
Read more