Prepare yourself for a night of Superstar Pop Diva Heaven when the Ariana & Taylor Experience comes to Airdrie Town Hall on March 6th! 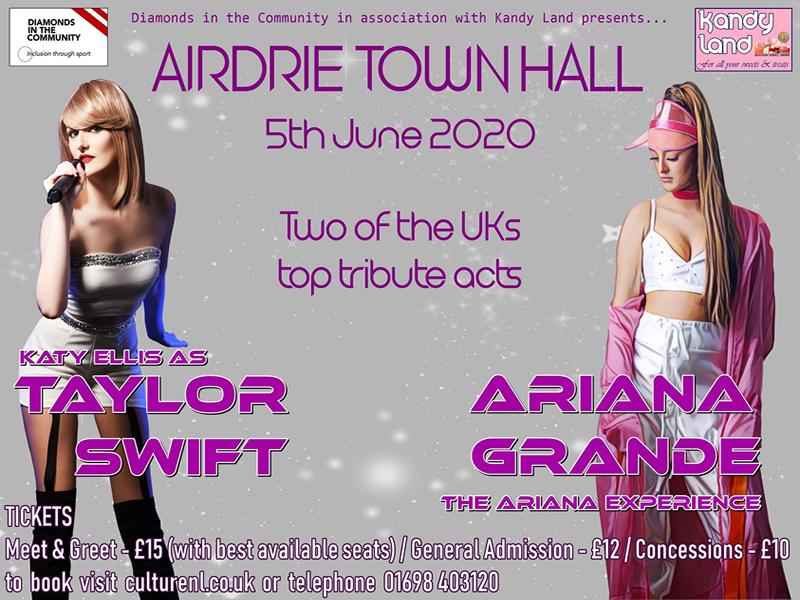 Hot on the heels of two sell out shows in 2018 and 2019, The Ariana Experience returns with a new show!

Angel Gold is The Ariana Experience, and was named as THE Number 1 tribute to the Pop Queen in 2018. She brings a full production stage show to the town hall, with identical costumes, choreography, stunning vocals, and a superb light show! She alone is a show not to be missed and this time she is bringing a friend Katy Ellis (Taylor Swift) to Airdrie Town Hall for the first time in her career.

Katys’ award winning show to Taylor Swift is the most prestigious tribute act for Tay Tay in the UK and some may say, the world. Created, produced and delivered with pride, professionalism and with the highest level of attention to detail, Katy and her dancers promise to deliver the most authentic recreation of a Taylor Swift show that you will ever find.

The traits possessed by Katy Ellis has ‘Swiftie’ fans from across the world feeling like they are back watching Taylor Swift herself. The show features all of Taylor’s much loved hits including; Shake It Off, Blank Space, Love Story, You Belong With Me, Look What You Made Me Do, I Knew You Were Trouble.

This fun energetic show gets all the audience involved and has everyone singing along and ‘Shaking it off’ to all of Taylor Swift’s hits.

The show is brought to you by local charity Diamonds in the Community, with all proceeds going to their projects in Airdrie and surrounding areas. Past and current, these include a varied Mental Health Project in the town for both adults and children; The setting up of the first ever Sensory Room in Scottish Football for children with an SPD; Sporting Memories projects for those living with dementia; Donating over 30000 pieces of unwanted sports clothing to KitAid; and setting up Walking football and Walking Netball for those looking to improve health and fitness.

While we take every opportunity to ensure the details for Ariana & Taylor Experience - POSTPONED are accurate, we always advise that you contact the event organiser before setting out for the event to avoid disapointment. All information (whether in text or photographs) is given in good faith but should not be relied upon as being a statement of representation or fact.

Other Events at Airdrie Town Hall

After the success of their 2019 tour, Glasgow Philharmonia bring their Movies to Musicals Show back to Airdrie Town Hall on 16th September 2021!
Read more

Cast off those January blues and join Stuart Ritchie, Educational Gardener at Castlebank Horticultural Centre for a fun scientific tour of everything blue found in the natural world!
Read more

Put on your wellies and join us for the annual Willow Harvest at National Museum of Rural Life, East Kilbride!
Read more