FRETS is delighted to present The Skinner Songbook, a new troubadour concert show produced by vocalist Grahame Skinner, on Friday 21st May, in the Strathaven Hotel! 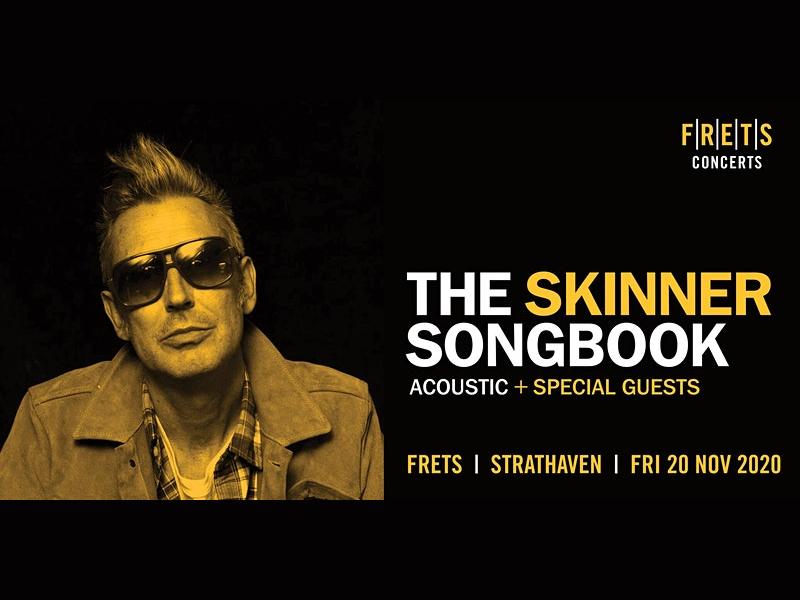 About The Skinner Songbook - POSTPONED

THE SKINNER SONGBOOK is a new troubadour concert show produced by vocalist Grahame Skinner. The idea of the show is to highlight songs Grahame enjoys performing live as a vocalist, including songs from his own repertoire (Jazzateers / Hipsway / Cowboy Mouth), and songs by other artists (including Scott Walker / Lee Hazlewood / Frank Sinatra / Lou Reed / Orange Juice / Josef K). The music in the show is stripped down and performed as torch songs, focussing on the interpretive voice and lyrics.

Grahame Skinner first came to prominence as a vocalist on the Jazzateers eponymously titled debut album on the Rough Trade label. Jazzateers were signed to legendary Postcard Records (and managed by label head Alan Horne), but after the demise of Postcard, Jazzateers joined label-mates Aztec Camera and the Go-Betweens in signing to Rough Trade. Skinner’s laconic Lou Reed meets Iggy Pop drawl worked perfectly with Jazzateers, resulting in international acclaim for the album.

After the demise of Jazzateers, Skinner regrouped and formed a new group, Hipsway, who would go on to significant commercial success with their debut album, which sired single success with Broken Years, Ask The Lord, The Honeythief, and Long White Car. The group toured internationally, with Europe and the USA being particularly popular countries for Hipsway. The Honeythief was a big hit single in the USA, and the group based themselves in New York to record their second album, Scratch The Surface.

Exhausted from years of recording and touring, Hipsway disbanded, though Skinner kept working on musical projects for a period before taking a complete break from being involved with the major label industry. However, on receiving an offer by Hamburg based label Marina Records to record, he returned to singing and writing, releasing two album on Marina with his new group, Cowboy Mouth.

In recent years Skinner has worked on a variety of projects, most notably reforming Hipsway to record an album “Smoke and Dreams” and return to live touring to considerable success.

While we take every opportunity to ensure the details for The Skinner Songbook - POSTPONED are accurate, we always advise that you contact the event organiser before setting out for the event to avoid disapointment. All information (whether in text or photographs) is given in good faith but should not be relied upon as being a statement of representation or fact.

FRETS is delighted to announce their first acoustic concert of 2021 at the Strathaven Hotel will be J.J. Gilmour on Friday 9th July!
Read more

FRETS CONCERTS is delighted to announce RODDY WOOMBLE will be performing an acoustic concert on Friday 6th August in the Strathaven Hotel!
Read more

The Bluebells Acoustic Concert at FRETS

FRETS is delighted to be presenting two acoustic concerts by The Bluebells on Friday 3rd & 10th September, in the Strathaven Hotel!
Read more

Robyn Hitchcock is one of England's most enduring contemporary singer/songwriters and live performers, catch him live at FRETS on Friday 1st October 2021 in The Strathaven Hotel!
Read more

An Evening with Robert Forster

FRETS is delighted to be presenting an acoustic concert by Robert Forster on Friday 15th October, in the Strathaven Hotel!
Read more

Tim Burgess will be performing two acoustic concerts at FRETS in the Strathaven Hotel on Friday 29th and Saturday 30th October!
Read more

Grant-Lee Phillips will be performing an acoustic concert at FRETS in the Strathaven Hotel on Saturday 22nd January!
Read more

Enjoy singing your favourite songs while catching up with some friendly faces at one of LEAP Project's Online Singing Groups on Mondays and Thursdays!
Read more

MacFloyd return to the Motherwell Concert Hall with their new show, To The Moon & Back, promising an unforgettable journey through the Pink Floyd catalogue!
Read more

A Night at the Darts

Scottish number one and two-times World Champion Gary Anderson is heading up a packed Night At The Darts at Motherwell Concert Hall on Friday 14th May!
Read more

A Fureys concert is always a night to remember, book your tickets for their show at Motherwell Concert Hall on Saturday 22nd May!
Read more

FRETS is delighted to announce their first acoustic concert of 2021 at the Strathaven Hotel will be J.J. Gilmour on Friday 9th July!
Read more