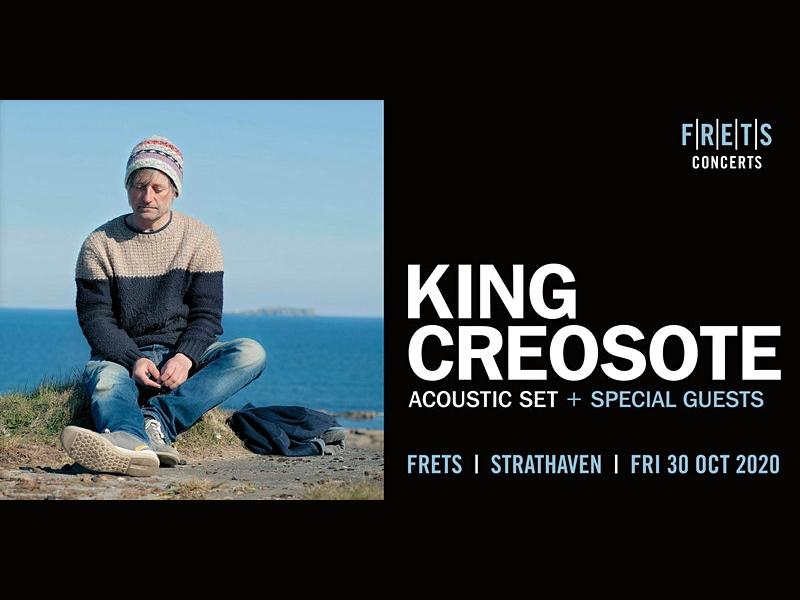 If you build a fence then you have to treat it, as any DIY buff will tell you. You have to make it durable; to help it help us weather storms. Fife's Kenny Anderson realised this when forming micro-label, Fence, in 1994 – and so he treated it, then treated us, with an alt-pop alter-ego: King Creosote.

Anderson has become of Scotland's most acclaimed and prolific, singer-songwriters: a squeezebox Casanova with a cosmic wordplay fetish, whose voice leaves gentle devastation in its wake. He was short-listed for 2011's Mercury Prize thanks to Diamond Mine, his sublime collaboration with Jon Hopkins.

In 2014, Anderson completed his first-ever film soundtrack for From Scotland With Love, a much heralded film that weaves Scottish archive film footage with KC compositions.

King Creosote released Astronaut meets Appleman in 2016 and continues to thrive creatively in cahoots with the Domino Recording Co.

Tim Burgess will be performing two acoustic concerts at FRETS in the Strathaven Hotel on Friday 29th and Saturday 30th October!
Read more

Grant-Lee Phillips will be performing an acoustic concert at FRETS in the Strathaven Hotel on Saturday 22nd January!
Read more

FRETS is delighted to announce their first acoustic concert of 2022 at the Strathaven Hotel will be J.J. Gilmour on Saturday 26th February!
Read more

FRETS CONCERTS is delighted to announce RODDY WOOMBLE will be performing an acoustic concert on 13th May in the Strathaven Hotel!
Read more

To commemorate the release of the 25th Bond film Entertainers proudly presents Bond In Concert at The Town House Hamilton on Saturday 23rd October 2021!
Read more

NEWS ALERT... Janey Godley and her soup pot are on tour... get ready for the Queen of Scottish Comedy coming to Motherwell Concert Hall in October!
Read more

Euan Stevenson and Konrad Wiszniewski give fascinating insights into the relationship between classical music and jazz in this superb, informal presentation at Biggar Municipal Hall!
Read more

If you're looking for an excuse to party, reminisce or simply be entertained by some of the best music ever written, then ABBA Gold the Concert at Rutherglen Town Hall is the show for you!
Read more

The Tina Turner Experience, the only completely live touring tribute to this multi-award winning legend, is coming to Motherwell Concert Hall on 28th October 2021!
Read more

Between the 28th and 31st October terrifying characters will entertain and scare you from beyond the grave at Valley View at Gouldings' Haunted Maize Maze!
Read more

After his meteoric rise through the ranks, Scottish Comedy Award winner and viral sensation Gary Meikle is back with his second tour show, Surreal! Catch him at The Town House, Hamilton in October!
Read more