FRETS is delighted to announce their first acoustic concert of 2022 at the Strathaven Hotel will be J.J. Gilmour on Saturday 26th February! 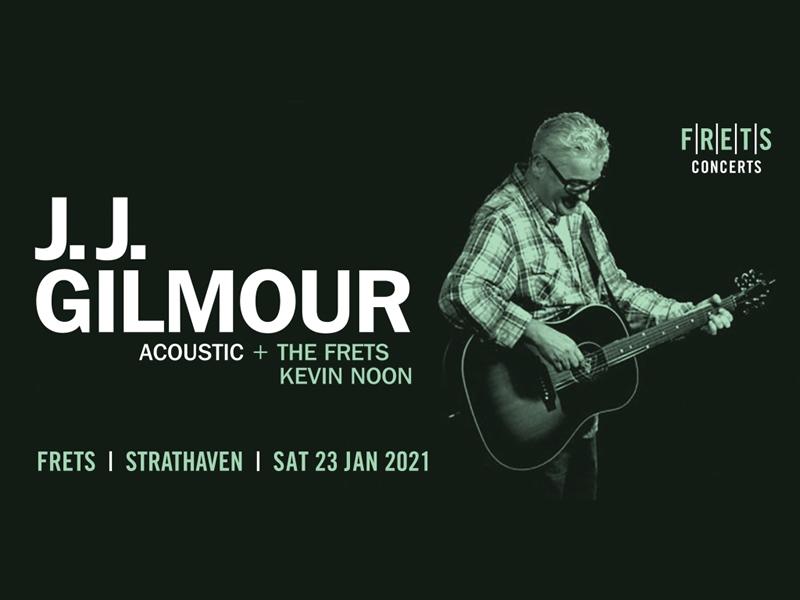 Jinky will be supported by local Strathaven artists The Frets (Douglas, Laughlin, and Dougie will be playing on stage for the first time in 40 years) and Kevin Noon.

J.J. GILMOUR - Internationally acclaimed Scottish singer-songwriter JJ Gilmour made his recording debut in 1989 with The Silencers, one of Scotland’s top bands who enjoyed huge success throughout Europe. A naturally gifted musician, (in his youth, JJ came very close to a career in classical music as a tenor) he first joined the band as a backing vocalist though later in the bands career JJ progressed seamlessly to lead vocalist.

Seven action-packed years of gigging and recording ensued during which The Silencers had gold albums, sold over half a million records for BMG/RCA, headlined major rock festivals and were regulars on hit TV shows across Europe. However, all good things must come to an end and after this successful period with the band, JJ decided he needed to take on new challenges and embarked upon a solo career.

After an initial period of prolific song-writing in 2001 at his home in Jersey (Channel Islands), JJ left for New York to record his critically acclaimed debut solo album ‘sunnyside P.A.L’ Produced by Dan Wise (Scissor sisters) and mixed by Michael Brauer (Coldplay, John Meyer) the album was inspired by the memory of a childhood friend Paul Anthony Lennon and was released in February 2002. The album became the catalyst for establishing his now fiercely loyal fan base and gained wide spread acclaim from his peers as an ‘outstanding debut album’.

In between the release of his first solo album and the long awaited equally successful second album ‘The Boy Who Didn’t Fall’ (released in 2009), JJ’s desire to write a musical began to take shape in 2006. This was where he began to sow the early creative musical seeds and formulate ideas for the show ‘Dancing Shoes’, based upon the life of footballer George Best. After his dream was realised “Dancing Shoes” played to over 70,000 people. He has also written the songs for the musical play ‘The Titanic Boys’ which had its debut in August 2012 at Belfast’s Grand Opera House.

JJ is currently living in Scotland, where he recorded his third album Slocomotion before departing Ireland. He has remastered and released ‘The Jersey Sessions’ & ‘Live at Cottiers’ albums and has finished compiling a newly released songbook of his works as a solo artist. He has also now completed album number four which saw him go back to The Foundry Music Lab to work with Sandy Jones recording the album he always wanted to do. DiX is 10 songs of vocals, piano, strings and uilleann pipe.

THE FRETS - playing together on stage for the first time in 40 years, The Frets will be performing an acoustic set of songs by Neil Young.

KEVIN NOON - Kevin has been instrumental in organising HangarFest in Strathaven over the years. He will be performing an acoustic set of song of his favourite covers.