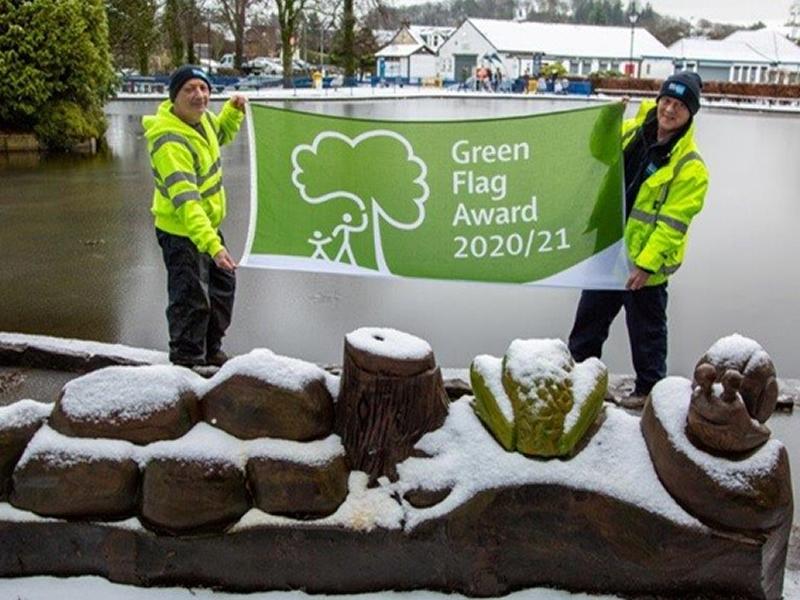 The park was the only one in the country to make the top ten in a nationwide poll by environmental charity, Keep Scotland Beautiful, of the UK’s best green spaces - for the fifth year running.

After expert judges awarded 77 parks in Scotland, and over 2,000 in the UK, the coveted Green Flag Award earlier this year, over 59,000 members of the public have been voting to select which of the Green Flag Award parks they felt were truly the best.

All Green Flag Award-winning parks and green spaces are entered into the annual People’s Choice Award vote, which every year sees countrywide mass public involvement in voting for the very best.

“To have been so consistently recognised as not only the top park in the country, but also one of the top 10 in the UK, just shows the hard work that everyone puts in to make the park such an enjoyable place to visit.

“I would like to thank all of our staff for their hard work, especially during a global pandemic, and special thanks also go to the Friends of Strathaven Park group for all their support.”

“Our congratulations and thanks go to the management and staff who do an excellent job in maintaining the park’s high standards.

“During the Covid pandemic, we feel Strathaven Park has played a key role in helping people’s mental health. The park has served as a refuge to many in allowing them to get out for recreation, or to simply enjoy the beautiful surroundings. Our new sensory garden together with the neighbouring wooden sculptures have proved popular areas to visit.”

Jamie Ormiston, Beaches and Parks Officer at Keep Scotland Beautiful, said: “I would like to congratulate everyone that continues to contribute to the success of trathaven Park. This award goes a long way in helping to demonstrate how, when working together, councils and communities can help to deliver beautiful outdoor spaces. In fact, some of the best in the UK.

“We are very proud of Scotland’s Green Flag Award parks. These spaces have been more important to us than ever this year as we live through national and local lockdowns. Every single Green Flag Award demonstrates the commitment and effort of everyone involved to protect and improve outdoor spaces across the country, providing cleaner and greener places that are so important to our health and well-being.”

To see how you get can your local park involved in the Green Flag Awards visit their website.