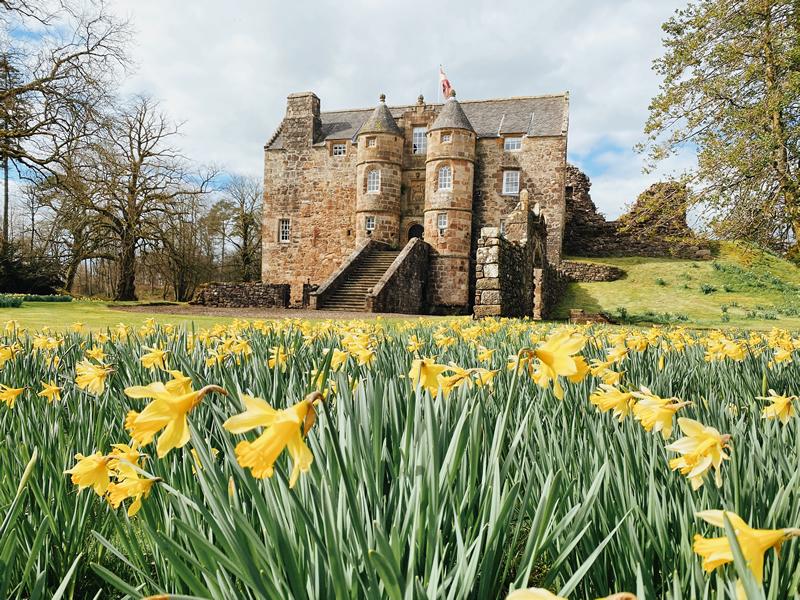 The castle which dates back from the 12th century has four double bedrooms and is available for exclusive hire for those looking for a break with a difference.

Situated in the heart of Rowallan Estate near Kilmarnock, it is the ancestral home of the Mures and the Campbells and is the birthplace of Elizabeth Mure, the second wife of Robert Stewart who later became King Robert II of Scotland.

The castle also has connections to Robert the Bruce and his family seal can still be seen on the old range access door and is believed to be the only remaining seal on public display and not in a museum.

The Old Castle had been under state guardianship by Historic Scotland before it was brought under private ownership and restored by Niall Campbell and his family, descendants of the Campbells of Loudoun who owned the castle from c1690 until the late 19th century.

The unique space which is acknowledged as one of the finest examples of Renaissance castle architecture has been painstakingly upgraded to maintain all the original features. It has four large bedrooms – three with super king beds and one double bed. Two of the bedrooms are en-suite and there is also a spacious family bathroom. For those looking to bring more of the family along, there is also the option to add two single sofa beds in the turrets in the Castle Gallery.

The Castle Gallery has been transformed to the perfect place to relax with a 55” TV, pool table, card table and a selection of musical instruments. There is also a grand dining room in addition to a well-equipped dining kitchen.

George Campbell, General Manager with Rowallan Estate, said: “A break at Old Rowallan Castle is a truly unique experience and is a great way to bring history to life. The castle still enjoys many of the original features and gives a real insight to some of Scotland’s legendary figures including Robert the Bruce.

“There is also much to be enjoyed at Rowallan Estate as well as across Ayrshire which is well-known for another famous Robert – Robert Burns.”

As well as offering a trip back in time, guests at Old Rowallan Castle can also enjoy all of the amenities of Rowallan Estate including a 19-hole Championship Golf Course designed by winning Ryder Cup Captain, Colin Montgomerie and two complimentary four balls are included.

The award-winning Glasshouse Restaurant is just a short walk away and private dining can also be arranged by prior arrangement.

Prices start from £1,000 per night and Old Rowallan Castle is available to book on Airbnb. For further information visit rowallancastle.com