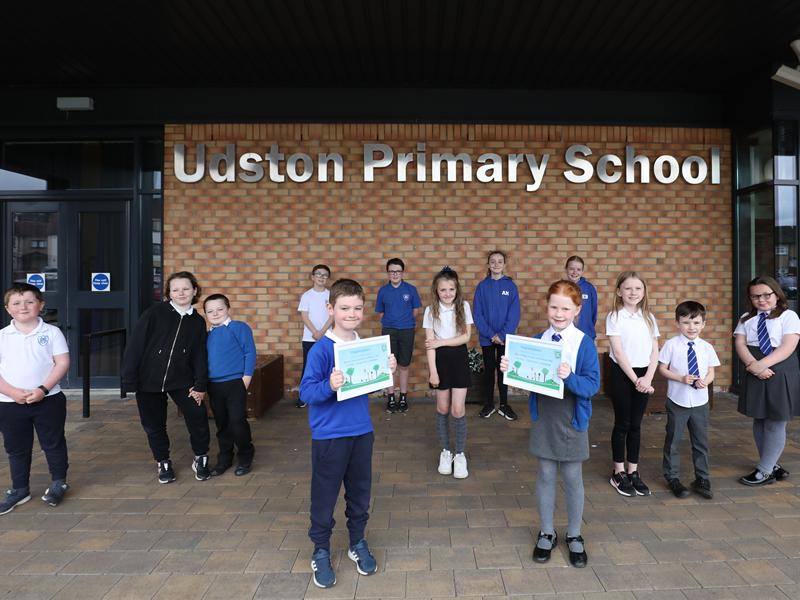 Megan Glancy, the local co-ordinator for Beat the Street Hamilton and Blantyre, presented the winning residents, businesses, schools and community groups with vouchers for topping the total and average points leader boards.

More than 8400 people signed up and walked, cycled, wheeled, scooted and ran 133,999 miles during the six-week challenge which took place from 17 March to 28 April, transforming the two towns into a real-life physical activity game.

David Livingstone Memorial Primary School topped both for total and average points and were presented with £350 in vouchers for each. Additionally, as the game’s chosen charity, Kilbryde Hospice also collected £500 thanks to participants’ efforts who successfully reached five different mileage milestones during the game, triggering £100 each time.

Woodside Primary School came second for total points and were presented with £250 of vouchers. Among the community groups, Happenin’ Dance came first on the total points leader board and second for average points, winning themselves £600 in vouchers.

James Skinner was the individual who clocked up the highest number of points in the whole game, and he is a leader with the 3rd Blantyre Scout Group who came first on the community teams leader board for average points. They also came second for total points. James’ fellow leader Christopher McCrory said: “The scout group really enjoyed playing Beat the Street. All our sections and leaders got involved.

“Initially we used it for some basic navigation training for our younger members as well as a group fitness activity. We then encouraged our scouts to participate as individuals but always encouraging it as a group activity. Our scouts really embraced the ethos of the competition and I believe we had nine members in the top 30 and one of our leaders, James Skinner won the competition clocking up over 1000 miles.”

Councillor John Anderson, the chair of the council’s Community and Enterprise Resources, said: “Watching the leader boards over the past few weeks has been fascinating and wonderful to see the total number of active travel miles increase in real-time.

“We’ve been really impressed with the enthusiasm that all participants have shown for the Beat the Street game and hope they will incorporate these healthy lifestyle habits into their daily lives.”