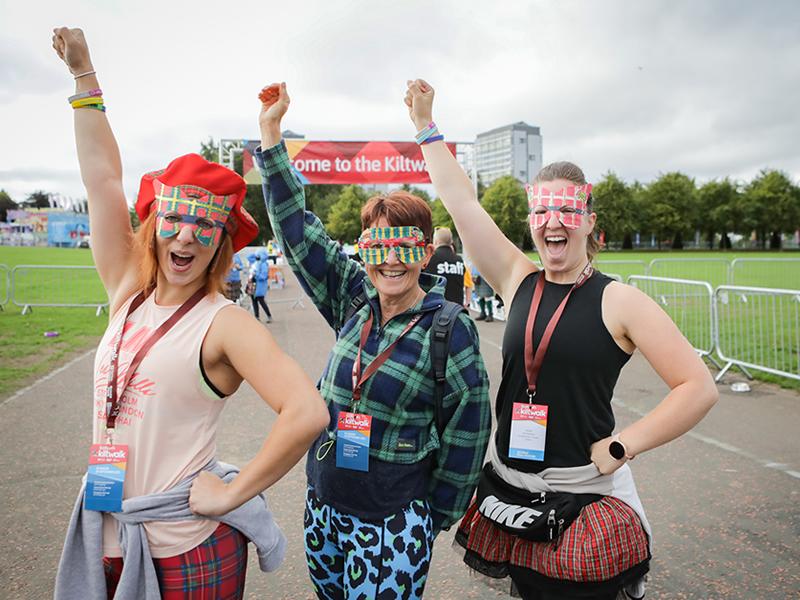 A video message from Sir Tom Hunter can be viewed here: here

Scotland’s legendary Kiltwalk Kindness has raised a remarkable £8.4 million for more than 1,200 charities across the country this year after 15,500 heroes put on a bit of tartan and took part in events.

Scotland’s Kiltwalk, held on Sunday September 26 in Glasgow, attracted 4,000 walkers of all ages. Together they raised £1.1 million for almost 500 charities desperate for assistance following lockdown. In a video message Sir Tom Hunter revealed their fundraising total is being topped up by an astonishing 100% after The Hunter Foundation added 50% and the Kiltwalk itself provided a further 50%.

Today [Tuesday 5 October] Sir Tom Hunter said: “Last week we all got together to walk for charities we care about and the smiles on everyone’s faces said it all: Kiltwalk is back. Scotland’s Kiltwalk raised just over £1.1 million for the charities but after speaking to walkers we were so struck by how much of a lifeline Kiltwalk has been that we are topping up this figure not by 50% but by 100%; with 50% coming from The Hunter Foundation and 50% coming from the Kiltwalk itself. So that’s an amazing £2.2 million for Scottish charities.

“I’m also proud to confirm that 2021 is our biggest year ever, raising a staggering £8.4 million for more than 1,200 Scottish charities. At a time when those in need really needed help, the Kiltwalk community went beyond the call of duty, so I want to thank them and all of our sponsors, Royal Bank of Scotland, Arnold Clark and Johnston Carmichael for their Kiltwalk Kindness. We look forward to seeing you all in 2022.”

News of the 100% top up was welcomed by charities, who have faced a variety of challenges as a result of the pandemic.

Caroline Speirs, co-founder, Calum’s Cabin, which offers retreats on the Isle of Bute for families struggling with childhood cancer, said:
“Kiltwalk is the largest fundraising annual event for Calum’s Cabin. It brings together Calum’s Cabin supporters from all walks of life including those who have been through the journey of their child suffering from cancer, families who are still going through the journey and tragically families who are walking in memory of their children. Receiving a 100% top up will be a great boost for us and will help make a real difference to the life of a child suffering from cancer.”

Fiona Leslie, senior community and challenge events fundraiser, Children’s Hospices Across Scotland (CHAS), said: "After a phenomenal 100% top up from Sir Tom Hunter and the Kiltwalk CHAS walkers raised an amazing £67,832 at Scotland’s Kiltwalk, which will help our mission to reach every single baby, child and young person who needs us, despite the current situation.

“We’re absolutely delighted to have been one of the biggest charities taking part and we’d like to say a massive thank you to every walker who took on the challenge – we know it wasn’t easy! It was fantastic to be back at a live event after the pandemic.”

The Kiltwalk’s 50% top up of £550,000 was donated from the charity event’s reserves, which were built up from registration and sponsorship fees, and the ongoing support of staff and volunteers.