Book festivals, musical journeys, favourite cartoon characters and fresh takes on our culture and heritage, will form part of a dazzling programme of events to celebrate Scotland's Year of Stories! 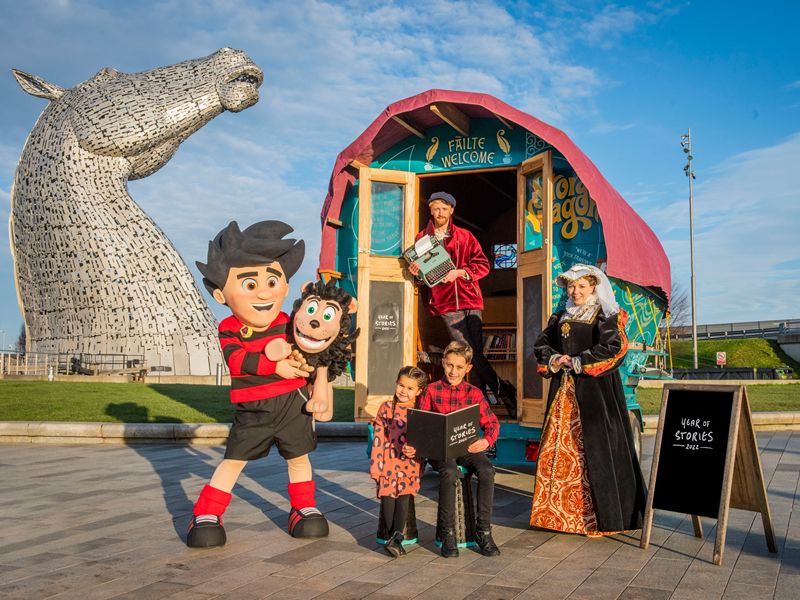 A nationwide programme of more than 60 events presented by a range of partners from national organisations to community groups has been unveiled in recognition of the wealth of stories inspired by, written, or created in Scotland. Additional events will continue to be added throughout 2022.

The programme was launched along with a new promotional video featuring the voice of Game of Thrones star James Cosmo. The Clydebank-born actor, known for his role in the fantasy epic as well as numerous Scottish film and TV shows, lends his distinctive timbre to inspire visitors and locals to explore Scotland and celebrate the Year of Stories.

The story begins across January-March with:
• Glasgow’s Celtic Connections presenting ‘Whisper the Song’, a series of five newly commissioned events celebrating Scotland's rich tradition of stories, interwoven with music, song and film.
• Once Upon a Time in South Ayrshire, beginning with a celebration of Burns then featuring a varied programme of events, exhibitions and experiences that will run across the year.
• Spectra – Scotland’s Festival of Light - returns to Aberdeen in February, celebrating the humour, seriousness and sheer gallus of Scotland’s storytellers, including ‘Writ Large’, which will beam the country’s finest contemporary storytellers’ prose and poetry in large scale projections and neon.

Summer (May-September) provides plenty to write home about:
• Borders Book Festival returns to Melrose with a special programme celebrating and exploring tales with themes from Walter Scott, to the Great Tapestry of Scotland
• The Wire Women project taking place as part of Perth and Kinross’ Year of Stories with community groups, creatives and cultural organisations sharing the stories of women, all connected through objects in the collections of the new City Hall Museum
• Celebrating its 75th anniversary, Edinburgh International Film Festival will bring Scotland’s Stories On Screen to iconic and exciting places and spaces
• The Dundee Summer (Bash) Street Festival will hail Dundee as the home of comics, celebrating its characters, stories, history and upcoming talent. The city will be declared as BEANOTOWN, with a pop-up comic museum, workshops, talks, film screenings, street fun and world record attempts
• The world-renowned Edinburgh International Book Festival presents Scotland’s Stories Now – proving everyone has a story to tell with tales gathered from across the country and then shared at the flagship event.
• In Skye, SEALL and Gaelic singer Anne Martin lead An Tinne, a collection of songs, stories and objects from across the centuries exploring the deep and fascinating connection between Scotland and Australia
• Moray’s Findhorn Bay Festival will offer a journey of exploration and discovery, celebrating the area’s heritage, landscape and people
• The Wigtown Book Festival in Scotland’s National Book Town will present two new commissions, Into the Nicht, an immersive Dark Skies tour, and Walter in Wonderland, a whirlwind theatrical tour through the history of the nation’s literature
• The Northern Stories Festival led by Lyth Arts Centre in Caithness promises a spectacular celebration of the stories of the Far North.

Continuing the story into Autumn and Winter:
• Transgressive North bringing us Map of Stories – in partnership with the International Storytelling Festival - ‘film ceilidh’ events celebrating the most iconic voices from Scotland’s oral storytelling traditions will invoke the places and landscapes from which they emerge
• Stirling Castle plays host to Tales from the Castle, an after-hours event that opens the gates to extraordinary stories and takes you on a journey through language and time.
• Scotland's Stories – Community Campfires, led by Scottish Book Trust will take place across the country, engaging with communities and showcasing people's tales from their own lives - featuring Luke Winter’s Story Wagon and culminating at Book Week Scotland in November.

There are also a number of events that will take place across the year, with some touring the country:
• Edinburgh, Benmore, Logan and Dawyck Botanic Gardens will host Of Scotland’s Soils and Soul - a multi-sensory journey celebrating stories inspired by Scotland’s rich and diverse plant life.
• The Scottish Storytelling Centre & Edinburgh UNESCO City of Literature Trust present Figures of Speech with prominent and emerging figures responding to our iconic stories and imagining them afresh, sparking new dialogues and directions.
• The RSNO bring us Yoyo and the Little Auk, a new story celebrating our diverse cultures for Early Years Audiences with an animated film and live performances at events and festivals across Scotland.
• Songs from the Last Page from Chamber Music Scotland will take place at book festivals, libraries, and community spaces and will create new songs from the last lines of our great and favourite fiction: turning endings into beginnings.

The events programme will bring Scotland’s places and spaces to life, sharing stories old and new covering everything from local tales to oral traditions, iconic books, to tales told on the big screen. They will be told by diverse voices and discovered in many different places, showcasing the many sides of Scotland’s distinct culture.

Across the country, from national to community organisations and businesses, people are preparing to tell their tales of Scotland, shining a spotlight on iconic stories and storytellers, tales of our people, places and legends and stories inspired by nature.

For 2022 the Themed Year will include a brand new events programme strand. The Community Stories Fund has been designed to support organisations and community groups to take part in and celebrate the year, spotlighting the unique stories that matter to them. The fund is being delivered in partnership between VisitScotland and Museums Galleries Scotland with support from National Lottery Heritage Fund, thanks to National Lottery players.

Around 100 events will be supported through the Community Stories Fund including:
• Weaving with words: the magic of Highland Storytelling at Hugh Miller's Birthplace Museum will feature a series of guided storytelling walks around Cromarty from April to October, inspired by the life and works of the 19th century geologist, folklorist and social justice campaigner.
• In March the distinctive story of Easterhouse will be shared in Mining seams and drawing wells: a living archive for Easterhouse, led by Glasgow East Arts Company with local residents.
• A Yarn Worth Spinning led by The Great Tapestry of Scotland will tell the story of the history and culture of textiles in the Scottish Borders from April to June, including an exhibition and fashion show.
• A cross generational project led by Catherine Wheels Theatre Company, The Phone Box – East Linton voices shared down the line, will take place in August with a rich soundscape of stories, memories and music.

In addition to the directly funded programme of events, VisitScotland will work with the widest range of partners to showcase and promote the full gamut of events and activities that celebrate Scotland’s many and diverse Stories across 2022. From the wider programme of Burns events in January, including National Trust for Scotland’s Burns Big Night In on 22 January, to the 75th Anniversary of our World Festival City to wonderful stories from our National Theatre of Scotland, including Enough of Him a remarkable story based on the life of one man who changed the course of history, and the ambitious programme coming to Scotland as part of UNBOXED, a UK wide celebration of creativity and innovation, 2022 is going to be a year in which stories are shared, and created on a huge scale.

Many more partner events celebrating the theme will be joining the programme over the forthcoming months.

Join the conversation #YS2022 and #TalesOfScotland