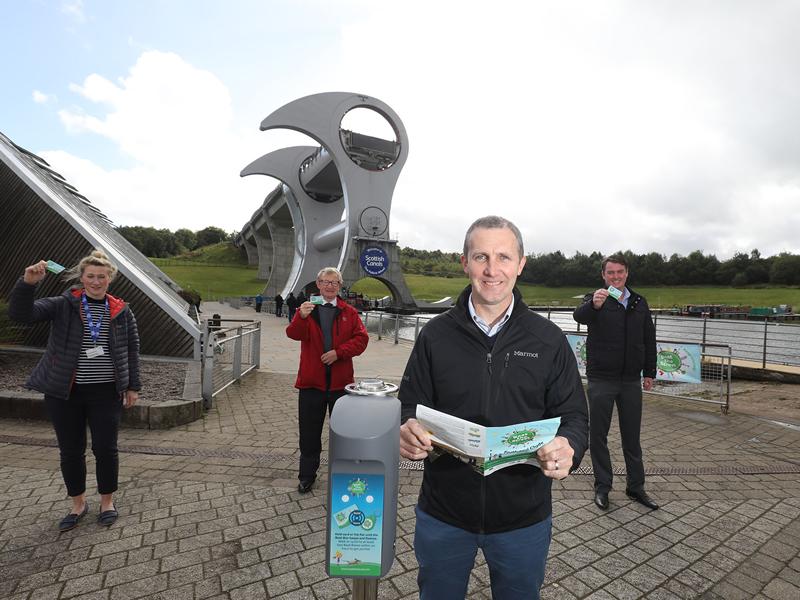 The Beat the Street game was officially launched at Falkirk Wheel on Friday with Michael Matheson MSP for Falkirk West, with organisers and representatives from the game’s organisers and funders; Central Canals Development Project, the Kelvin Valley and Falkirk LEADER Programme and Paths for All's Smarter Choices, Smarter Places Open Fund.

The game started on Wednesday, 9th September across the towns of Bonnybridge, Camelon and Kilsyth and continues for four weeks.

The free, interactive game is open to anyone of any age who would like to get involved. There are 30 beeping and flashing sensors called Beat Boxes placed around half a mile apart. Simply pick up a card from one of the distribution centres and then walk, roll, scoot, cycle or run between the Beat Boxes to score points.

The further players travel, the more points they score for their community or school team. Each week is ‘Go’ themed (Go Play, Go Explore, Go Travel and Go Wild) with different activities to help participants get the most out of their Beat the Street experience.

As well as the chance to win prizes for your school or community team, the game has been adapted to reward players for their personal achievements.

With lockdown being eased after the outbreak of Covid-19, communities are understandably cautious about getting out and about for physical activity and exercise. The game has been adjusted to ensure that it is completely safe to play and so it complies with social distancing restrictions.

The changes to the game mean that you do not need to touch a Beat Box, players can simply hover their card or fob near the sensor and it will register the swipe. Further measures such as regular sanitisation of Beat Boxes and temporary pavement markings to help will also be put in place.

Beat the Street is being delivered by Intelligent Health on behalf of the Central Canals Development Project and is funded by the Kelvin Valley and Falkirk LEADER Programme and Paths for All's Smarter Choices, Smarter Places Open Fund.

Michael Matheson MSP said: “I am delighted to support the Beat the Street programme which encourages people to ditch the car and enjoy all of the benefits of active travel.

“Beat the Street is a positive and community-focused way of encouraging people to get more active, by walking, cycling, rolling and wheeling around this beautiful area, plus it’s more important than ever to get as fit and healthy as possible while we fight the threat of Covid-19”.

The Green Action Trust, one of Scotland’s leading environmental regeneration charities, is coordinating the Central Canals Development Project. Andy Macpherson, the trust’s development officer for the project added: “It’s great to see so many people already out and about playing the game. The aim is to encourage people of all ages to have fun walking, cycling and running and then to make it a daily habit. It’s also a positive way of encouraging people to explore their local outdoor spaces and seek out routes that they may not have considered before.”

Beat the Street was devised by GP Dr William Bird MBE in 2010 to get communities active together and it has been played across the UK and beyond. More than a million people have played the game and previous games have taken place in South Lanarkshire, East Renfrewshire and Glasgow Canals.

More information on how to get involved is available at www.beatthestreet.me/forthandclyde