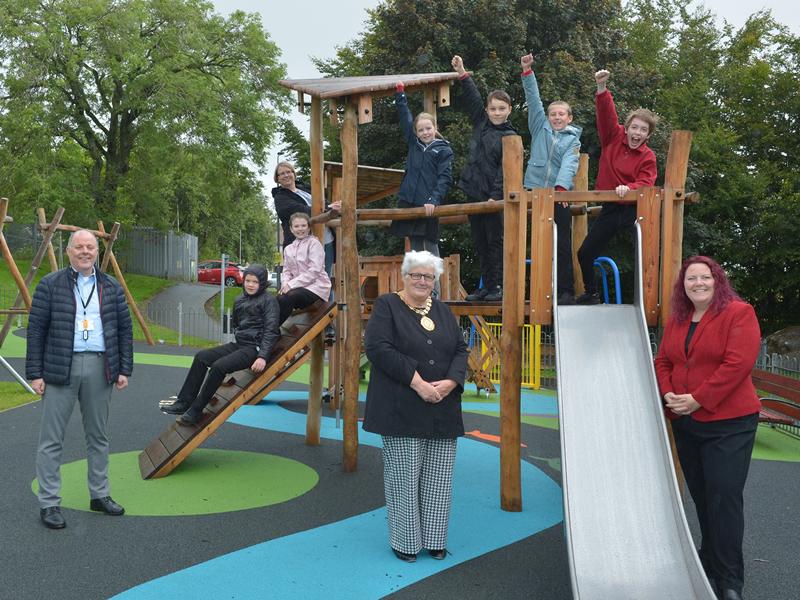 Banton Play Park Group consulted with the local community to develop plans to replace the old play area, with children and young people encouraged to draw and build models of their ideas.

The group then worked with our Community Partnership Team to turn their plans into reality with £85,000 from the Local Development Programme.

At the centre of the new facility is a wooden climbing area, as well as an accessible roundabout, swings and a cable way. A new bench and picnic table were also installed.

Shona Smith, Secretary of Banton Play Park Group commented:"This is a fantastic development for the village and we want to thank everyone, but especially local children and young people who took park in the consultations. As a group we have been supported by local councillors and staff from North Lanarkshire Council Community Partnership Team and this has been invaluable as we took the whole vision forward."

A new sign, designed by a pupil at Banton Primary School, will be installed in time for a special socially distanced event being organised by the community group.

Cyclists across South Lanarkshire can now access a mapping resource showing the cycle network across the area.

Work will start at Dumbreck Local Nature Reserve in Kilsyth this month to re-naturalise the Garrell River, create new paths and conserve threatened habitats and species.

Santa Claus has been kidnapped by an evil witch who is trying to ruin Christmas, with the help of a fairy and clown, can you help save Santa and Christmas by finding his outfit, reindeer and more!