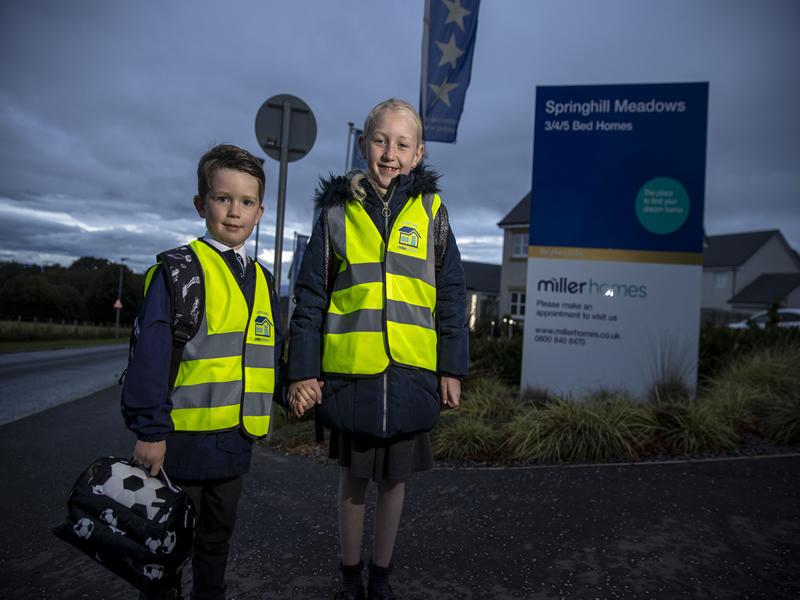 Launched on Monday 5 October, to coincide with Walk to School Month, Miller Homes is donating high vis yellow vests to pupils near its ten developments across the West of Scotland.

A number of vests will be available to collect from; Springhill Meadows in Barrhead, Crofthead in Newton Mearns, Ellismuir Park in Broomhouse, Wallace Fields in Robroyston, Braidfields in Clydebank, Bothwellbank in Bothwell, Highstonehall in Hamilton, Green Park Gardens in Bellshill, Newton Park in Cambuslang and Hawkhead in Paisley.

Louise Caldwell, Sales Director for Miller Homes Scotland West, said: “The pandemic has encouraged us all to get out and about more and walking to school has never been more popular. However, as we get into the darker, winter months, we want the children in the communities we are building in to enjoy their walk safely. These high vis vests will help them stand out to vehicles ensuring they are as safe as possible, while still benefiting from physical exercise and fresh air.”

The high vis vests are on a first come first serve basis, and in keeping with current social distancing restrictions, one parent will be able to pick up a vest at the marketing suite for each development Thursday to Monday 10.30am - 5.30pm.

For more information on Miller Homes, visit the website at www.millerhomes.co.uk.

Image: Jake Pentland (5) and Evie Downs (7) are the first to try out their new high vis vests from Miller Homes.