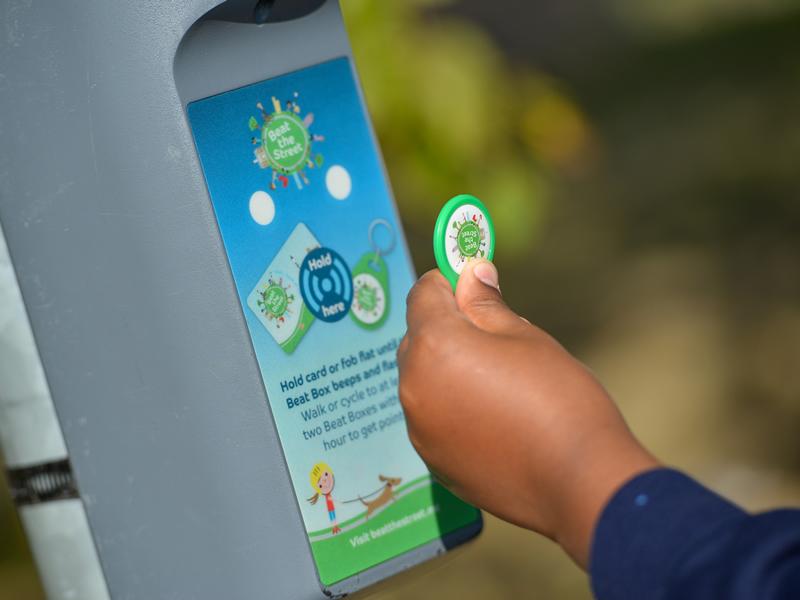 The Beat the Street Hamilton and Blantyre game has launched with more than 4,340 participants signing up on its first day and together walking, cycling, running, scooting and wheeling their way to more than 3,550 miles.

Beat the Street is a free, interactive six-week game that encourages people of all ages to move more and to get active. It helps inspire people to ditch the car and to get active, doing great things for their health as well as helping to improve air pollution and congestion.

Michael McGlynn, Executive Director of Community and Enterprise Resources, said: “We’re delighted to see the Beat the Street game once again taking place in the area. After months of lockdown, it’s wonderful to be involved with something so positive that helps people get outside and exercising together safely.”

Residents will have noticed the beeping and flashing sensors called ‘Beat Boxes’ on certain lampposts around the towns. Primary school pupils have received fobs while parents and teachers will receive a card from the school so they can accompany children or take part on their own. The wider community can pick up a contactless card from one of the distribution points which are listed on the website at www.beatthestreet.me/hamiltonblantyre.

Players then walk, roll, scoot, cycle or run between the Beat Boxes which are spaced approximately half a mile apart – hovering their fobs or cards over the Beat Boxes to score points. The further players travel, the more points they score for their community or school team. The first Beat Box you hover your card over marks the start of your journey. Walk, cycle, wheel, roll, run or scoot to the next one and you score 10 points for each subsequent Beat Box.

School teams can win up to £350 of sport or book vouchers on each leaderboard while community teams will be eligible to win up to £350 worth of sports and fitness vouchers. Registered players can win ‘Lucky Box’ prizes simply by swiping their card or fob at a Beat Box throughout the game. Additionally, to reward personal milestones, players can claim vouchers for free swims, gym passes and more thanks to South Lanarkshire Leisure and Culture.

Kilbryde Hospice has been selected as the charity that will benefit from up to £500 - the further players travel, the more that will be donated!

Erin Sandilands, lead community fundraiser at Kilbryde Hospice, said: “We are delighted to have been selected the charity for the Beat the Street Hamilton and Blantyre game. This is a great initiative that helps participants get more active. Every time you go out for exercise, you’ll be helping us to raise funds!”

The first week of the game is themed ‘Go Play’ for players to get to grips with the rules and subsequent weeks have a different focus, from Go Explore to Go Wild and Go Travel.

More information is available at www.beatthestreet.me/hamiltonblantyre and on social media at @BTSHamBlan