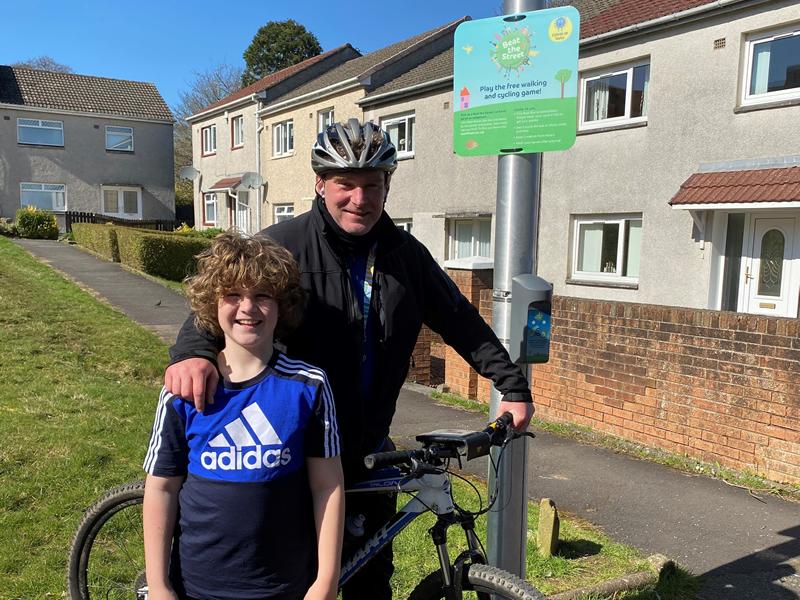 His chosen route ended up being 44 miles and took him just over six hours. The former goalie turned personal trainer found about the Beat the Street physical activity game via his son’s school and thought it would be a good opportunity to raise awareness and funds for the Help Feed a Family for a Fiver campaign run in conjunction with The Butchery Kitchen.

The scheme is run by his clients Louise and Stan Dacre who have provided more than 1,000 high quality meals and fresh produce to families in need since November 2020. Roddy’s fundraising has added £1,200 meaning a further 240 meals will be delivered.

Roddy spent most of lockdown delivering spin classes on Zoom, so welcomed the opportunity to get outdoors on his bike.

He said: “Beat the Street is a really good initiative great idea for a game and has encouraged us all to get some fresh air and exercise, whether that’s cycling to school or walking around the area’s parks. After months of shielding, I thought it would be good to challenge myself by visiting all of the Beat Boxes which – depending on the route- should be about 40 miles but there are three or four different climbs.

“Hamilton is perfect for cycling – there’s lots of routes and parks so this challenge was a good laugh.”

Beat the Street is a six-week game taking place across Hamilton and Blantyre until Wednesday, 28th April. The game, which is being funded by South Lanarkshire Council, is free to people of all ages, creates a real-life, interactive experience that gets the whole community moving. It’s contactless, and played outdoors in small bubbles, so it’s safe to play during the COVID-19 pandemic.

Michael McGlynn, Executive Director of Community and Enterprise Resources, said: “This is a great way to help promote Beat the Street as well as raising awareness of the need to support families struggling during the pandemic.

“Congratulations to Roddy for all his efforts, highlighting the benefits of the game and encouraging more people to get out in the fresh air. Whether cycling, walking or running, being outdoors really does help everyone’s physical and mental health.

“I am sure it will help boost the interest in the game over the Easter school holidays as young people look to get back out and about after a long time studying at home.”

Players can join a school, workplace or community team and there are prizes for the teams that travel the furthest within the game area. The further you travel, the more points you score. School teams can up to £350 of sport or book vouchers, while community teams can win up to £350 worth of sports and fitness vouchers. Any registered players might also win a ‘Lucky Box’ prize simply by hovering their card or fob at a Beat Box throughout the game.

To find out more about Roddy’s challenge and the Butchery Kitchen’s Feed a Family for a Fiver campaign, visit www.thebutcherykitchen.com