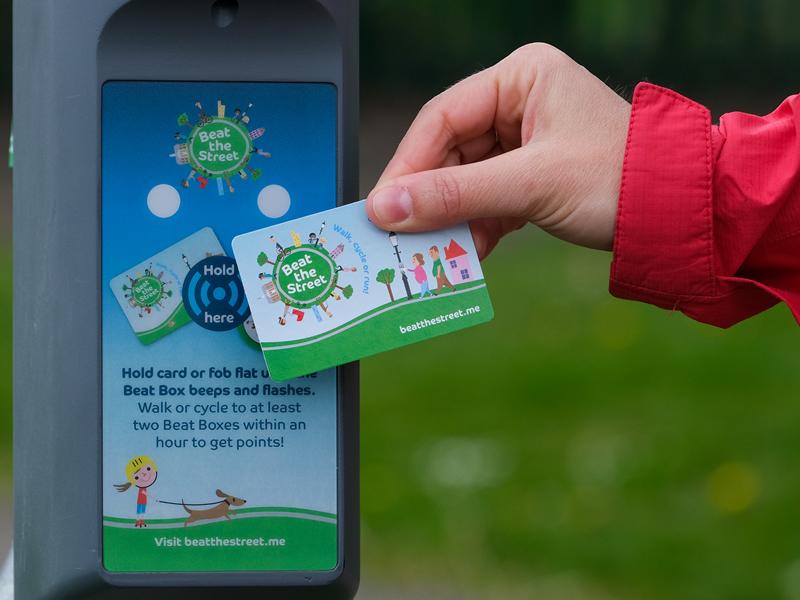 Beat the Street North Lanarkshire is designed to get communities moving by helping people to make small changes, such as walking or cycling to school every day, to improve health and help embed physical activity into everyday life. So far more than 1.4 million people and 4,000 schools have taken part in games across the UK and beyond. Evidence shows that the programme really helps adults and children become more active.

Since it was created by GP Dr William Bird, the game has been played by more than 1.4m people in more than 120 locations in the UK and beyond. Beat the Street has not only had a significant impact on increasing low levels of physical activity amongst adults and children, but also helps encourage active travel which in turns reduces congestion, improves air quality, plus the game helps families spend time in green spaces together. It has recently been adapted to ensure that it’s safe to play during the COVID-19 pandemic with contactless cards and fobs.

The game is open to anyone of any age who would like to take part. Children use a fob which will be provided by participating primary schools, and adults can pick up a free card from one of the distribution points listed on the www.beatthestreet.me/northlanarkshire website.

Players then find their nearest “Beat Box” which will appear on lampposts around the towns. There are 139 of these around the area and they have been adapted to make them more sensitive so that you don’t need to touch them – simply hover your card or fob over the Beat Box and it will beep and flash to record your points.

Your first visit to a Beat Box registers the journey; then walk, cycle or wheel to the next Beat Box within an hour to score 10 points.

As well as encouraging people to get active, Beat the Street has been shown to get communities more engaged, less car-dependent and fitter which is vital in the fight against COVID-19.

“Getting out and moving more, plus spending time with friends and family in green space is one of the best things people can do right now for their physical and mental health and Beat the Street has been proven to do that in a safe way.

“It’s free to take part in Beat the Street and it’s open to everyone regardless of age, ability or background. It’s an inclusive game that encourages you to exercise from your front door and to clock up the miles within the game framework.”

More information will be available www.beatthestreet.me/northlanarkshire and on social media at @BTSNorthLan