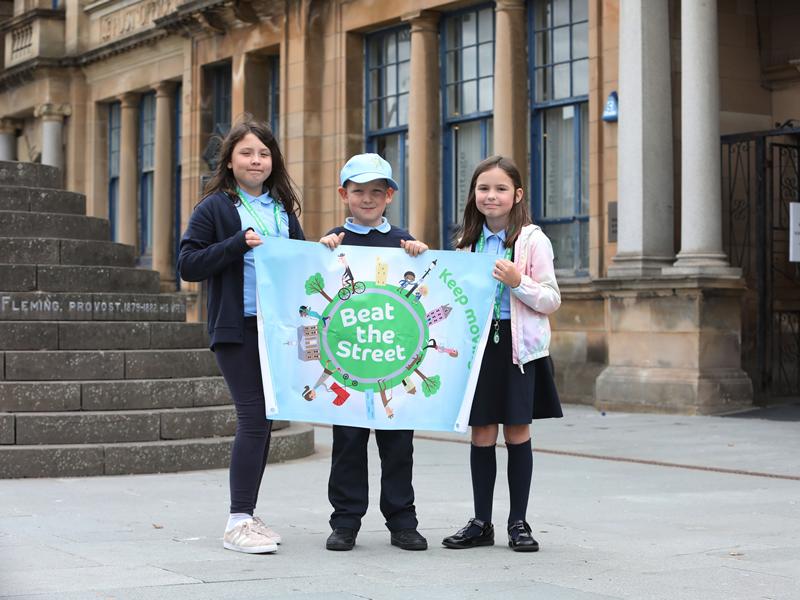 Together, they have walked, cycled and wheeled their way to more than 13,500 miles with the total mileage constantly increasing!

Beat the Street is a free, interactive game that encourages people of all ages to move more and to get active. It started on Wednesday 15 September and runs until Wednesday 27 October.

As well as helping people create healthier lifestyle habits, it also improves air quality by reducing congestion and pollution. And it connects people to their communities and green spaces.

Sixty-three beeping and flashing sensors called ‘Beat Boxes’ have been placed on lampposts around both towns for the duration of the game to help participants explore the local area and all it has to offer whilst encouraging the habit of regular exercise.

Primary school pupils have been provided with fobs while parents and teachers will receive a card from the school so they can accompany children or take part on their own.

The wider community can pick up a contactless card from one of the distribution points which are listed at www.beatthestreet.me/CamGlen

Players then walk, cycle or wheel between the Beat Boxes which are spaced approximately half a mile apart – hovering their fobs or cards over the Beat Boxes to score points. The further players travel, the more points they score for their community or school team. The first Beat Box you hover your card over marks the start of your journey. Walk, cycle or wheel to the next one and score 10 points.

There are leaderboards for schools, community teams and charity teams [insert charity teams] and each is divided into total and average points to ensure that smaller teams are in with an equal chance of winning.

The first week of the game is themed ‘Go Play’ for players to get to grips with the rules. Subsequent weeks will have a different focus, from Go Explore to Go Wild and Go Travel.

Councillor John Anderson, the chair of the council’s Community and Enterprise Resources, said: “Even prior to the pandemic, many children in our area were not meeting the Chief Medical Officer’s recommendation of 60 minutes physical activity every day. The picture for adults is much the same.

“And as we are now finding our way out of the pandemic, Beat the Street provides an incredible opportunity to support children and their families to become active as a habit, through a fun and friendly competition.

“We’re delighted that the game will give everyone of all ages and abilities the opportunity to explore the area, to spend time together as a family and to enjoy walking, cycling and rolling outdoors in all the wonderful green spaces across Cambuslang and Rutherglen.”

There is still time to get involved! More information, including where to collect a free card and map is available at www.beatthestreet.me/CamGlen and on social media at @BTSCamGlen