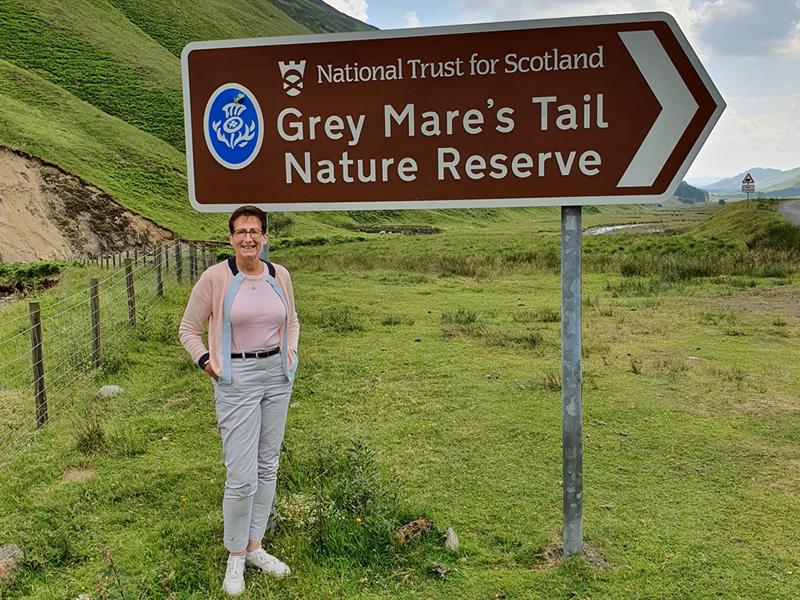 Edinburgh volunteer Rosemary Laird is in the midst of a personal grand tour of Scotland, with the aim of visiting 61 iconic Scottish landmarks and locations on an epic fundraiser for the National Trust for Scotland.

Rosemary, who works for Scotland’s national conservation charity as a volunteer at the historic Georgian House in Edinburgh, is on a mission to visit a total of 61 properties during 2021.

That’s one for each birthday, as Rosemary turns 61 this year, and having visited 47 so far, she remains on track to meet her target.

“The past year has been quite difficult for everyone,” explains Rosemary, “and, like many people, my partner and I hoped to get a holiday in this year. With that looking like a distant dream, we decided to turn our efforts to holidaying across Scotland. We love the historic properties in the Trust’s care, which are packed full of history and stories to tell. With this in mind, we decided to embark on an adventure and challenge ourselves to check off as many National Trust for Scotland properties this year as physically possible.”

Having worked as a volunteer at Georgian House in Edinburgh for the past two years, Rosemary has a personal connection with the National Trust for Scotland and a deep appreciation of the scale of the work the charity undertakes.

This year, the conservation charity also celebrates a significant birthday, over 90 years it has saved, maintained, and shared many of the country’s most loved places, rich with history, heritage, nature, and culture.

Rosemary and her partner, Donald, are donating £20 for each and every visit on their grand tour of National Trust for Scotland properties and have raised a running total of £940.

“We’re absolutely delighted with all we’ve achieved so far,” says Rosemary. “Highlights from our trips have to be House of Dun in Montrose, Broughton House in Dumfries and Galloway, and the Highland properties, including Inverewe Garden and Culloden Battlefield.”

The National Trust for Scotland relies on its members and donors to protect the places that we all love. Become a member at nts.org.uk.