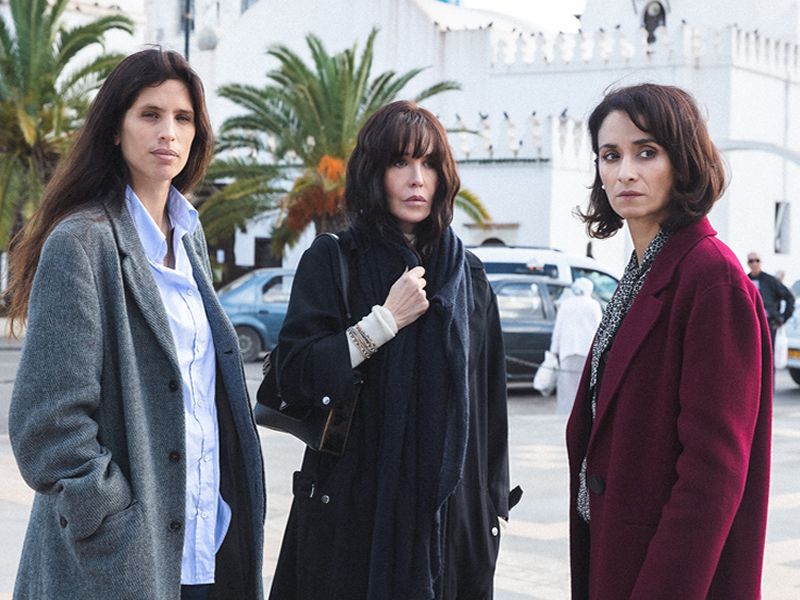 The organisers of the French Film Festival UK are delighted to reveal an exciting new edition of the online programme under its fff@home umbrella, which will run from Friday 3 to Sunday 12 December.

The nine days of online screenings are organised in collaboration with INDEE+. Programmers have curated an exciting selection of titles, including several UK premieres and a classic of the New Wave for audiences to enjoy and appreciate on laptops, computers and TVs. The films featured are only available as part of the Festival on fff@home and have a window to watch for 48 hours. Several packages are available, including a full Festival Pass and a 25% discount for young people aged 16-25.

The online Festival opens with Yamina Benguigui’s feminist drama, Sisters. Starring Isabelle Adjani, it’s about three generations of French Algerian women, exploring the bonds of family which seem forever strained. This is a return to cinema for Adjani, who, along with her co-stars Rachida Brakni and Maïwenn, contributes an impeccable performance.

Fans of the classics will relish the chance to see one of Jean-Luc Godard’s most dynamic films, Vivre sa Vie. Starring Anna Karina it combines brilliant visual design with a tragic character study. A landmark of the French New Wave in a restored digital copy, it features some of Karina and Godard’s most iconic moments.

Other highlights include the feel-good Fly Me Away by Christophe Barratier, the hilarious French Tech from Bruno Podalydès who directs and stars alongside his brother Denis; family comedy The Speech by Laurent Tirard; a Sixties-set relationship drama, My Father’s Stories and an intriguing fable, Snowglobes, by Yannick Ruault.

Closing this year’s online festival is the powerful The Enemy, by Belgian director Stephan Streker. Jérémie Renier plays prominent politician Louis Durieux who is accused of murdering his wife. The film probes the depths of the human soul, not only of Renier’s character but of the audience themselves.

Richard Mowe, director and co-founder of the Festival, said: “With the programme in cinemas continuing until 15 December the online offer gives audiences another way to sample le cinéma français - especially in more remote parts of the country without easy access to the big screen.”

Funders, sponsors and partners – among them Screen Scotland, Institut français, Alliance Française, as well as TotalEnergies, TV5MONDE, Unifrance, agnès b, and Côte – have committed their overall support to this year’s 29th edition.

Tickets are on sale now and an Early Bird discount of 20% is available on all tickets purchased before Friday 26 November.

Spring into the holidays at Loch Lomond Shores with a family day out!

There's plenty to do at Loch Lomond Shores over the Spring Holidays with festivals, children's rides, storytelling experiences, street food, markets, water sports and a visit from The Easter Bunny!

Paisley's popular Food and Drink Festival is returning in-person for 2022 with a two-day feast of fun this April!

Dust off those family heirlooms. Dive into old boxes. Dig out forgotten treasures.

Amanda Lamb is flinging open The Saved & Remade Workshop in a new series for REALLY.

Historic Environment Scotland (HES) has announced details of its summer events programme which will once again see history brought to life at sites across Scotland.

This Easter, Dobbies, the UK's leading garden centre, partners with The World of Peter Rabbit to celebrate the iconic bunny's 120th birthday with an exclusive Easter Breakfast!

Plans have been revealed for a five-star adventure waterpark to be established in West Lothian, creating a major visitor attraction for the area that will also support new jobs.

Come and enjoy a fun filled day out on the banks of Loch Lomond!

Artisan Market to open at M&Ds

A new 'Meet the Maker' Market is to launch at M&Ds Scotland's Theme Park offering an emporium of fine foods and hand-crafted gifts!

One week to go until LAMS bring Broadway to the Royal Burgh!

An exciting initiative to support the recovery of Scotland's live music industry has launched today, with more than 120 artists set to perform at more than 100 venues across the country.

The new Great Tapestry of Scotland visitor centre, where Scotland’s story begins, has today been revealed as the next home for The Essex House Tapestries: Life of Julie Cope.

The live music scene is back with a bang with the announcement of the TTV Discover Tour!

Scotland's music scene is as exciting as ever! TTV has been telling you who's going to be hot next for a decade and this year's TTV DISCOVER tour is no different!

Festival for Young at Heart about to get underway

The annual arts festival aimed at the 50+ age group is set to take place at venues across South Lanarkshire!

Dobbies, is launching its new Afternoon Tea offering just in time for Mother’s Day, with a complimentary Hotel Chocolat gift for all mums over the Mother’s Day weekend.

The charity Guide Dogs is launching a new service in Edinburgh and Hamilton for families who are supporting a child with sight loss.