Ki Aikido Scotland was established in 1967 by Sensei Tennant who has run the club since its conception to the present day, we are very welcoming to beginners. 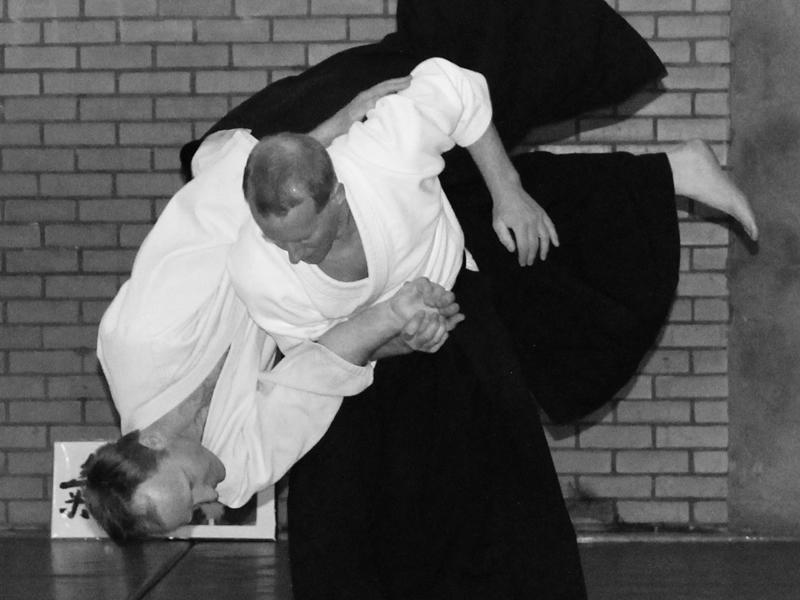 The club is very welcoming to beginners, who are encouraged to drop in to have a go.

The club has had a long and rich history. Consistently teaching to a high standard, many students have attained the rank of black belt, and gone on to teach Aikido themselves.

Originally organised in 1967 as extra training time for the Hamilton Hill Aikido Club, the first Aikido dojo in Scotland, the East Kilbride club quickly grew in numbers and established an identity of its own.

The club has had a number of influences throughout it's development. Having been affiliated with the Aikikai of Great Britain, under Sensei Kazuo Chiba, and Ki No Kenyukai, under Sensei Koichi Tohei (through the Ki Federation of Great Britain), the instruction at the club represents a deep and wide understanding of the principles of Aikido and mind/body unification.

In 1984 the club left the Ki Federation and therefore the Ki No Kenyukai. Since that time the club has remained unaffiliated with any governing Aikido organisation and continues to teach to a high standard the principles of SHIN SHIN TOITSU DO(unificaton of mind and body) and SHIN SHIN TOITSU AIKIDO (Aikido with mind and body unified) as taught by Sensei Koichi Tohei.

The club was established over 40 years ago by Sensei Matt Tennant who is still the chief instructor, bringing his wide experience and understanding of Aikido to training.

Our training emphasises the application of "mind-body co-ordinated" principles to daily life, to promote relaxation and confidence, as well as to Aikido techniques.

A spirit of mutual co-operation allows an environment in which each individual can continuously improve and refine their techniques to ensure that they work practically.

All members train to a high level. We have relatively few gradings, preferring to focus on improving our Aikido rather than concentrate on passing gradings.

All information (whether in text or photographs) is supplied in good faith but should not be relied upon as being a statement of representation or fact. We take every opportunity to ensure the details for Ki Aikido Scotland are accurate, please contact us at hello[@]whatsonnetwork.co.uk if any of the above information is incorrect.

Sorry, but we have no upcoming events for Ki Aikido Scotland. If you know of an event taking place at Ki Aikido Scotland or anywhere else in Lanarkshire tell us about it and we'll list it on the website, for free!

Chesworth Martial Art School for Taekwondo and Self Defence

Learn the martial art of Taekwondo and practical self-defence with expert and friendly tuition courtesy of the Chesworth Martial Art School for Taekwondo and Self Defence in Airdrie!
Read more

**Train from as little as £16 per month or Pay as you go****FREE XS Dragon training suit****Our Dragon classes are taekwon-do lead with lots of fun!!...
Read more

The TAEKWONDO ALLIANCE is an organisation that aims to help you and your family reach your full potential. We have classes for all age groups, and we...
Read more

Is your child interested in wrestling? Bring your child to our children's sessions where we teach Olympic freestyle wrestling to children between 6-12...
Read more

Qigong classes for Health and WellbeingThe vast majority of qigong classes being taught today involve little more than slowed down aerobics but at San...
Read more

Shiraoka Kendo Kai is a kendo dojo based in Bellshill and the only dojo practising kendo in the Lanarkshire area.
Read more

TIGER CUBZ INSTRUCTORSMrs Caroline VenturaMiss Jenna VenturaOur Pre-School Martial Arts Programme is aimed at children between the ages of 3 and 5, and...
Read more

All Martial Arts listings in Lanarkshire

Waiting for the Magic - The Photography of Oscar Marzaroli

Join fellow crime lovers at Lanark Library for their Death at the Library Murder Mystery Evening on 15th March!

The Story of Guitar Heroes

If you like music and guitars you will LOVE this show... don't miss 'The Story of Guitar Heroes' at Motherwell Concert Hall on February 19th!