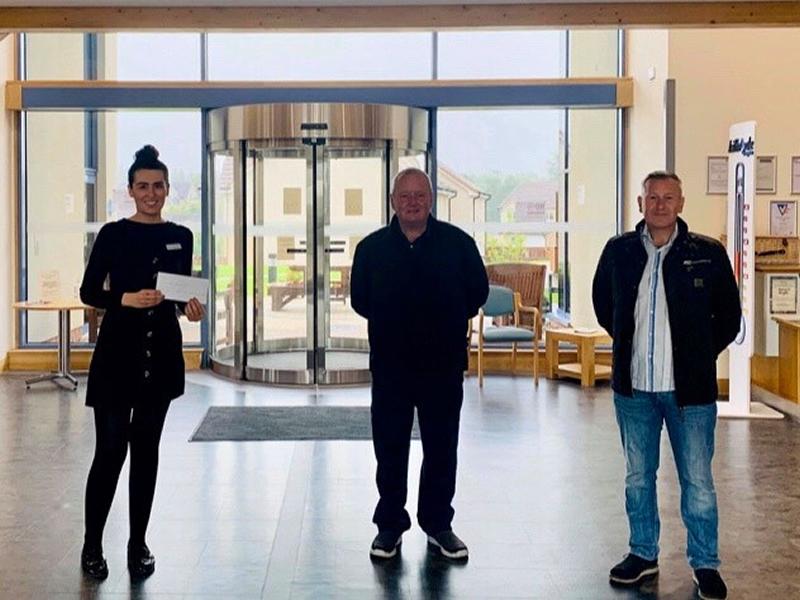 The Murray 12 Walkers topped the total and average points leaderboards for community teams, winning £600 worth of shopping vouchers.

Team members Billy McCabe and David Owens handed over their prize to Ainslie Mason from Kilbryde Hospice last week. David was also the ‘top tapper’ meaning that he travelled further than anyone else in the competition.

The East Kilbride community was challenged to walk, scoot, run, cycle or wheel as far as possible during the six-week game from February this year. Owing to the outbreak of Covid-19, the game unfortunately had to be ended early. More than 12,000 people took part and notched up a total of 124,000 miles. Organisers also donated £500 to Kilbryde Hospice when the community managed to exceed the target of 100,000 miles.

Beat the Street is delivered by Intelligent Health on behalf of South Lanarkshire Council, Smarter Choices, Smarter Places and the Scottish Government.

The initiative aims to encourage cleaner air, more active travel and healthier lifestyles and encourages players of all ages to get active and to ditch the car, and walk, cycle or run instead.

Ainslie Mason, lead corporate fundraiser at Kilbryde Hospice added: “We are so grateful for the support of Beat the Street, Billy, David and everyone at the Murray12 Walkers for donating so generously to Kilbryde Hospice, and for continuing to think of us during these difficult and uncertain times.

“We are relying on our local community and businesses more than ever to support us and we have been overwhelmed with the response, this will help us to continue to provide the high standard of care and support to our patients and their families.”

The hospice also put together a video for Beat the Street’s #KnowYourCommunity campaign which is available to view on the Beat the Street Kilbride Facebook page.