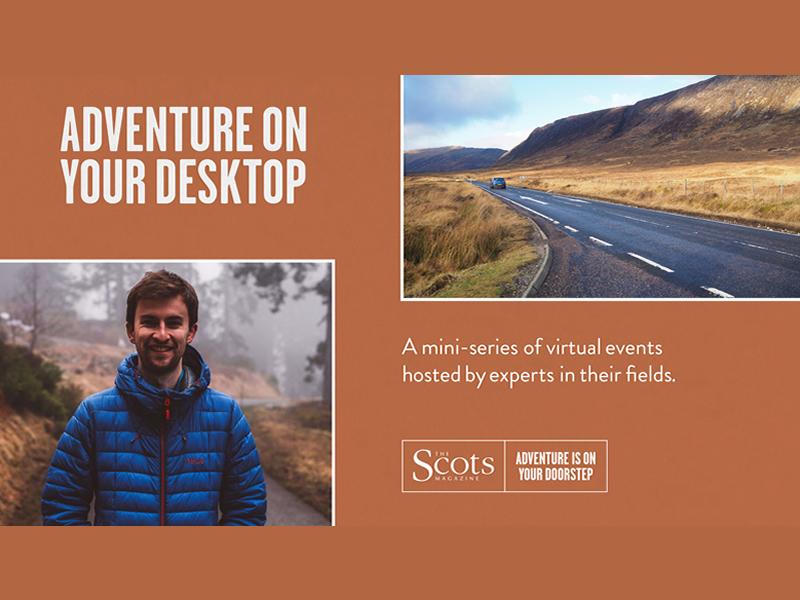 Adventure On Your Desktop: The Scots Magazine launch free virtual festival celebrating the best of Scotland

• Go wild swimming and climb a Munro – all from the comfort of your living room.

With far-off travel on hold for the time being, The Scots Magazine is celebrating the cultural spread of Scotland with a week-long virtual festival – offering something for everyone, from those itching to be in the mountains, to those hoping to entertain the kids.

Launching on December 14, ‘Adventure To Your Desktop’ is a five-day online festival bringing to life the best of Scotland, through how-tos, cook-alongs and masterclasses from Scottish talent live on Facebook Premiere.

Authors and wild swimming enthusiasts Vicky Allan & Anna Deacon, top private events chef Barry Bryson, record breaking Munro runner Donnie Campbell plus artist and homeware designer Fi Douglas of Bluebell Gray will be showcasing their professions, skills and hobbies to keep adventure alive for Scots who remain in lockdown, due to the current tiering system in place across the country.

Climb a Munro from your Living Room - Monday, December 14, at 7pm
Scottish ultra-runner Donnie Campbell kicks-off the ‘Adventures on Your Desktop’ week with a hill-walking training session. Donnie recently broke the world record for a continuous round of Scotland’s highest mountains in 31 days and 23 hours, and will have attendees climbing a Munro from their living room with a ‘Joe Wicks style’ Hill Walking high-intensity training session.

Landscape Photography Masterclass with Ali Horne - Tuesday, December 15, at 7pm
Photographer and drone pilot Ali Horne will host a photography masterclass packed with top tips to capturing the best of Scottish scenery, whether that’s the dramatic landscape of Glen Coe, or a mesmerising winter sunrise in your local park. Best known for his breath-taking landscape photography, as a part of the Adventure to Your Desktop series Ali will impart his advice on how to capture Instagram-worthy shots wherever you are.

Dive Into Wild Swimming with Anna Deacon & Vicky Allan - Wednesday, December 16, at 7m
Ever wanted to try wild swimming? Take a dip into the blue with the heating on full as authors of Taking the Plunge, Anna Deacon and Vicky Allan, take viewers on a wild swim in the sea, and give their top tips for braving the cold, and how to warm up afterwards.

Festive Family Paint-along with Bluebell Gray - Thursday, December 17 at 4pm
There’s something for the family too. Fi Douglas, watercolour artist and founder of Bluebell Gray, will lead an online paint-along with her two sons, Archie and Ted. Fi started hosting online painting sessions with her children during lockdown earlier this year, and due to their huge success, they are making a festive return as part of the virtual festival.

The event hosts and members of The Scots Magazine team will be available after the premiere to answer any questions and chat to attendees through Facebook comments.

Robert Wight, Editor of The Scots Magazine, said: “Earlier this year we launched our fantastic ‘Adventure Is On Your Doorstep’ map to show people that wherever you are in Scotland, and whatever you’re interested in, there are loads of adventures for you close by.

“However, it goes without saying that this year we haven’t been able to go on as many adventures as we’d like. So to close the year and look forward to 2021, we wanted to go a step further and bring adventures into people’s homes – and showcase the best of Scotland, whether that’s preparing for a thrilling weekend in the mountains, an exciting cultural experience or a fun festive activity for the family.

“Focused around a programme of adventures you can complete at home, we hope the virtual festival goes some way to helping you enjoy the best of Scotland until real adventures are possible, and introduces you to a new hobby – or two – as well as providing inspiration for when life gets back to normal.”

‘Adventure On Your Desktop’ is a free virtual event series beginning Monday, December 14. Tune in to www.facebook.com/scotsmagazine/ to find out more.