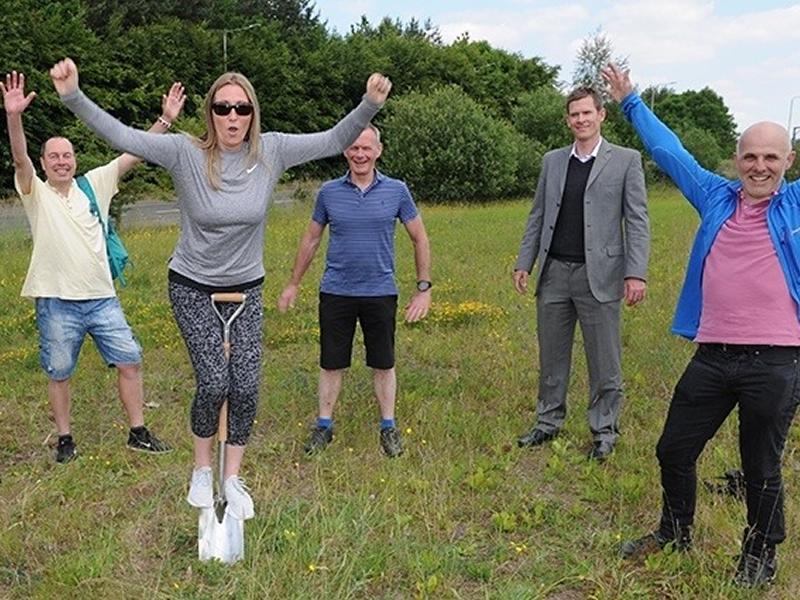 The Clyde Cycle Park will regenerate a derelict brownfield site in Cambuslang and provide a major new cycling venue for the west of Scotland.

Funding for the project has been made available by South Lanarkshire Council, the Scottish Government Clyde Mission Fund and Scottish Enterprise.

The Clyde Cycle Park has three main goals:
• to encourage more people in the local community to be physically active through cycling
• to support drivers to switch from car use to cycling to encourage a low carbon lifestyle
• to inspire more people to participate in cycling as a sport and achieve success

In Phase 1 of the Clyde Cycle Park, the first 250m of a 2km of track is being created to provide a training circuit. Other works involve paths, the first part of the car park, and units for an office and cycle storage.

From September onwards, this will allow a regular programme of coaching and training to be offered for cycle clubs and the local community as well as a base for commuting by bike.

“There is huge interest in cycling, partly because of the inspirational success of Scottish cyclists in international competitions, but also because people want to be more active and use alternatives to car travel because of the climate crisis. The problem we have is a lack of off-road facilities in the area for all parts of the community, and young people in particular, to learn how to cycle confidently.

“The Clyde Cycle Park will provide opportunities for the community and cycle clubs throughout the area to cycle in a safe environment. It will also contribute to the regeneration of Cambuslang by bringing a derelict site back into use and attracting visitors and income to the town.

“We are very grateful to all three of the funders of phase 1 of the Clyde Cycle Park – the Scottish Government, Scottish Enterprise and South Lanarkshire Council – for their great support of the project.”

“We are delighted to see the first phase get underway and it is very exciting times for cycling enthusiasts in South Lanarkshire.

“Huge credit has to go to Cambuslang Community Council, East Kilbride Road Club and Healthy n Happy Community Development Trust who have shown great vision and determination to get this project moving forward.

“I can’t wait to see this first phase completed and when all aspects of the project are in place, we will have a truly world-class cycling facility on our doorstep.”

One of Ayrshire's leading hotels has unveiled its plans for new autumn spa breaks for men, women and couples from 1st September until 30th November 2022.

170M years in the making... GlasGLOW is back this October with an epic new dinosaur light show

itison has announced GlasGLOW will return to the Botanic Gardens between 26th October & 6th November, with a blockbuster new show... an epic dinosaur adventure into The Land That Time Forgot!

The UK's biggest National Park was the chosen location for the latest Green Space Dark Skies project, by the outdoor art experts at Walk the Plank.

A magical Christmas experience for all the family, this year M&D's Theme Park's 'BELIEVE in Santa' is BIGGER, BETTER, with MORE SPARKLE than ever before!

Motherwell Theatre have once again teamed up with Spillers Pantomimes to bring their production of Cinderella to the venue this Christmas!