Beat the Street Cambuslang and Rutherglen winners presented with their prizes

Organisers of the recent Beat the Street Cambuslang and Rutherglen game presented a cheque for £500 to Kilbryde Hospice as part of a wider celebration event for the winners of the challenge! 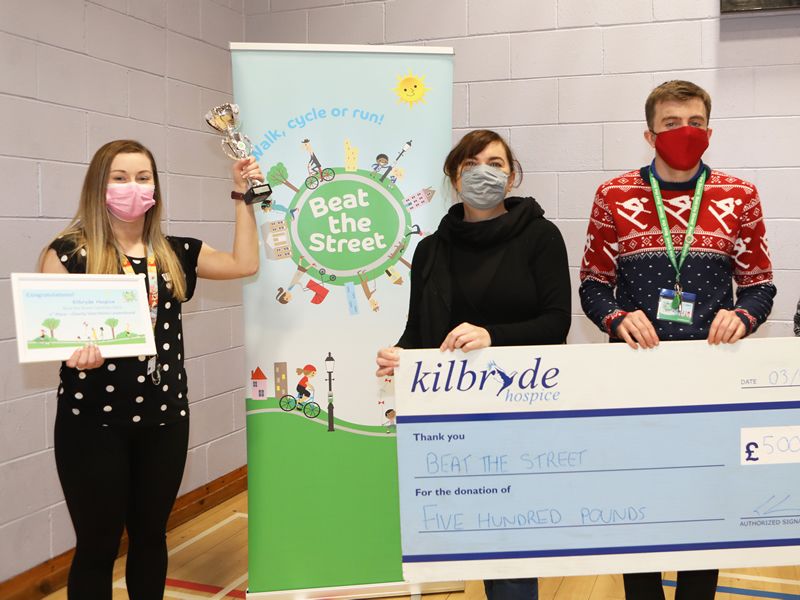 A presentation was held this week to recognise the amazing contribution made by players in the Beat the Street game that took place across the towns in September and October.

Councillor John Anderson, the Chair of South Lanarkshire Council’s Community and Enterprise Resources, presented the winning teams with trophies, plus vouchers for sports equipment or books. He also made a special presentation of £500 to Kilbryde Hospice who were the game’s chosen charity team. With just six players, they managed to score 9,030 points.

Councillor John Anderson added: “Well done to all of our winners who are here tonight, as well as everyone who took part. There have been lots of friends and families out on the streets and in green spaces, and it’s wonderful to see the lifestyle changes that people are making as a result of the competition.”

Beat the Street engagement coordinator Raymond Hood, said: “The game was a huge success, and we are glad to get this opportunity, in person, to congratulate and thank you. A massive well done to you all for achieving what you achieved during the short six weeks. I hope everyone is proud of their individual and collective contributions, enjoyed contributing and keeps up the positive lifestyle changes we made during the game, which is the most important reason we take part in Beat the Street.”

The physical activity game took place over six weeks from September to October with 8,535 people taking part and walking, cycling and wheeling as far as possible within the game framework. Together, the community clocked up 118,351 active travel miles.

Beat the Street is a free, interactive game that encourages people of all ages to incorporate physical activity into their daily lives by rewarding teams with points and prizes the further they travel. Beeping and flashing sensors called Beat Boxes were placed around the two towns participants invited to score points on journeys between them.